Thailand is divided up into four main regions: south, central, northeast, and north. This division is made due to multiple factors, including significant geography aspects, language differences, historical differences, and economic differences.

In Thailand the four major dialects of Thai are: Central Thai, Thai version of Lao which is called Isan (we have two videos of Isan lessons), Southern Thai and Northern Thai language.

Many people say the southern dialect is spoken the fastest among the four dialects (but I have some Isan friend who speak faster than southerners), and the locals like to shorten words to single syllables, and shorten sentences to one or two words.

In this video my mom shows you what southern Thai dialect sounds like. Please bear in mind that the accent can be varied in different parts of the south region. If you go to Pattani, Narathiwat and Yala, the dialect is different, it is known as je he (เจ๊ะเห) or the Tak Bai dialect.

Where is Southern Thailand? 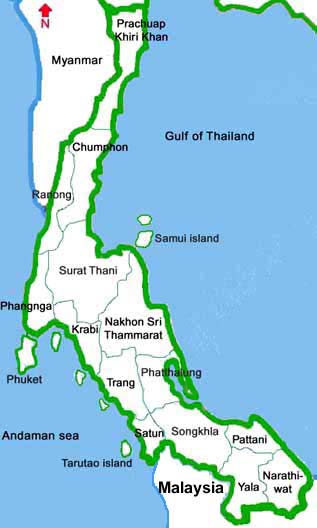 15 Southern Thai Phrase from the video:

Southern Thai Dishes and My favourite Place to Eat Them

Paradise Found at the Surin Islands