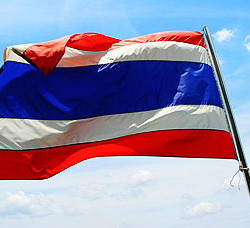 Thai National Anthem เพลงชาติไทย /pleeng châad tai/ In Thailand, you will hear the Thai national anthem played every day at 8am and 6pm. Every TV and radio station plays it, and it will be played over government building speaker systems, at the sky train and underground in Bangkok, bus stations, in parks and in most other public places. Thai schools also play the national … END_OF_DOCUMENT_TOKEN_TO_BE_REPLACED 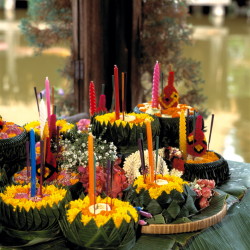 This week is the week of Loy Krathong day, this year it falls on Nov 17th, 2013. (If you are not sure what this festival is, click here to learn more about it) I have been hearing the Loy Krathong song everywhere I go and also in the local TV. It is kind of catchy so I have this song playing in my head over and over. In case you would like to sing along, here are the … END_OF_DOCUMENT_TOKEN_TO_BE_REPLACED 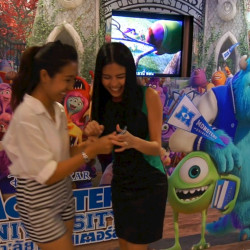 This lesson we are taking you to a cinema in Bangkok. You will learn words and expressions related to watching movies. Hope you will enjoy this lesson as much as we enjoyed making it for you. : )       แกอยากดูหนังมั้ย? gae yak duu năng mái? Do you want to watch a movie?   แกอยากดูเรื่องไรอ่ะ? gae yàak duu rûeng rai … END_OF_DOCUMENT_TOKEN_TO_BE_REPLACED 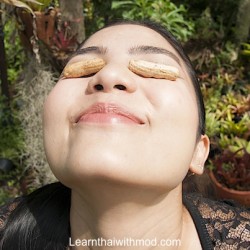 The other day my friend said she  admired a Thai singer so much because he was so charming and handsome, then the other friend expressed her disagreement and called her “ตาถั่ว dtaa-tùa”! I was laughing at them and thought I had to write about this interesting expression. “ตาถั่ว dtaa-tùa” peanut eyes  is Thai expression used in two different situations; ตา /dtaa/ means … END_OF_DOCUMENT_TOKEN_TO_BE_REPLACED