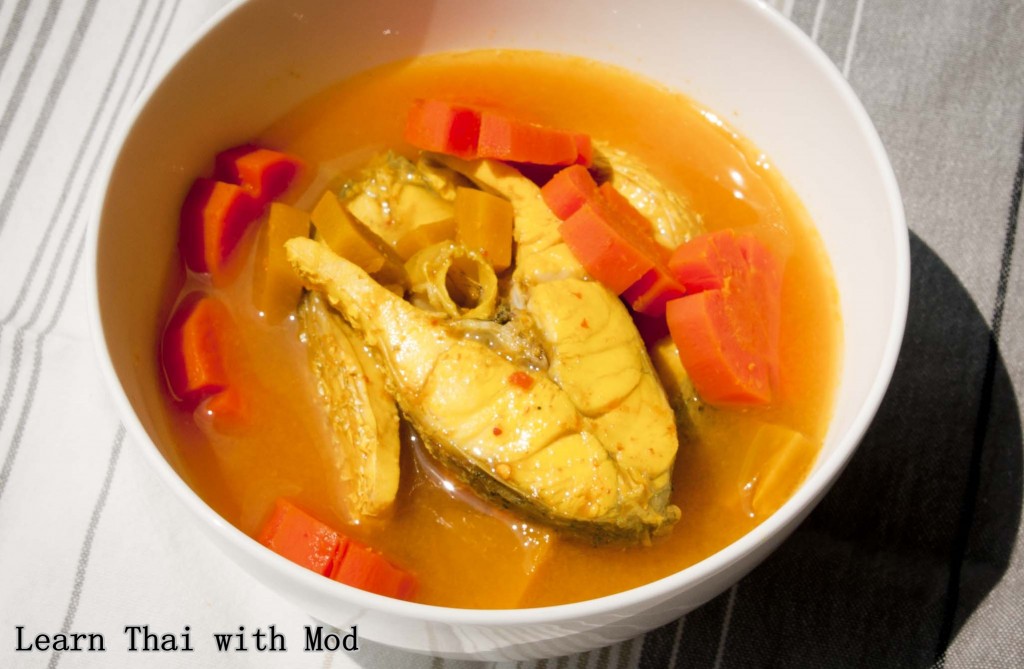 Thai Sour Curry or Gaeng Som แกงส้ม is my family’s favorite Southern dish.  We loved it so much that it was served at least twice a week.  After I finish my meal I can even drink the curry source on its own.

I got the curry paste from my mom when I visited her in Nakhon Si Thammarat. In my opinion, no one makes Gaeng Som better than her:)

Turmeric (ขมิ้น [kà-mîn]) is the main ingredient in the curry paste, and it colors the paste yellow. The rest are garlic (กระเทียม),  shallots (หัวหอมแดง) and chilies (พริก).

Gaeng som is commonly cooked with bamboo shoots, green papaya or slices of pineapple. This time I couldn’t find any of those in the market in my neighborhood, so I used carrots and pumpkins instead. It was good too although I said it myself:)

ส้ม “sôm“ is generally used to refer to orange the fruit and orange the color in the Thai language, but the word ส้ม “sôm” also means “sour.” Although it is no longer used in that sense in the modern times (at least in central Thai) But it doesn’t change the fact that ส้ม “sôm” means “sour,” especially in the context of kaeng som.

Other examples of food that contain the word ส้ม “sôm” that have nothing to do with orange but everything to do with sourness: ส้มตำ Som Tam (Thai green papaya salad), น้ำส้มสายชู nam som sai chu(vinegar), ปลาส้ม pla som (soured fish), etc.

If you would like to find “Southern Gang Som” in Bangkok or Central Thailand, please make sure that they understand that you want “Southern Sour Curry”. The reason is that  there is another Thai Sour Curry which is actually has orange color and it is also called Gang Som. In order to prevent confusion, Southern Sour Curry is called “Gaeng Lueang” (แกงเหลือง – literally “yellow curry”) in Central Thailand. Yet, ask any Southerners who are still connected to their roots what they call the curry which Centralites refer as “kaeng lueang,” and they’ll tell you that it has been and will always be “kaeng som” to them.

Where to find Southern Thai food in Bangkok