Floating markets are one of the most popular tourist destinations in Thailand, several of them are outside Bangkok. If you want to get a glimpse of truly traditional Thai life style but don’t have enough time to travel out of the city, it is is well worth the effort to spend a few hours at Kwan-Riam floating market.
Kwan-Riam floating market is one of the newest floating markets in Bangkok. It only opened in May 2012. The market is located in the eastern suburbs of the capital, by the Saen Saeb canal คลองแสนแสบ (“Saen Saeb “ is a canal (Klong) in central Thailand, connecting the Chao Phraya River to Prachin Buri and Chachoengsao). It is between two temples: Wat Bamphen Nuea (Seri Thai Road 60) and Wat Bamphen Tai (Ramkhamheang 187).

There is a vast selection of inexpensive delicious Thai food available, such as classic boat noodles, Isan food , Thai desserts , clothes, souvenirs and many more. 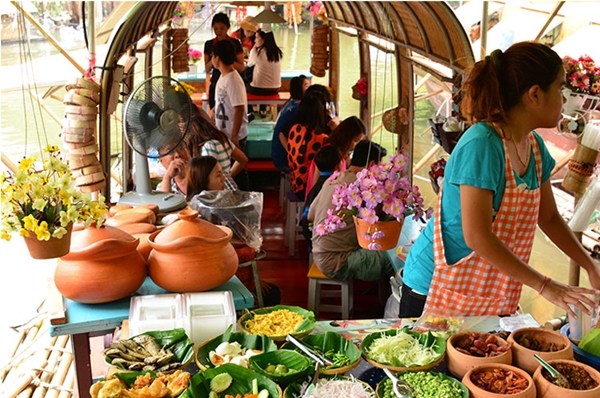 The main thing that impresses me is the tour boat service that allow visitors to go for sightseeing, observing the life by the canal together with the Thai guides aged around 7-8 years old telling about the background of the market. The guides only speak Thai language but I think it is still pleasant although you don’t understand the language. The tour only costs ten Baht.
At the moment there are almost no foreign tourists visiting this place, but I think this will change as soon as the word goes around. Local people like to go to the market early in the morning to give alms to monks on boats. The alms round starts at 7:30 a.m. and is usually over in about 45 minutes. 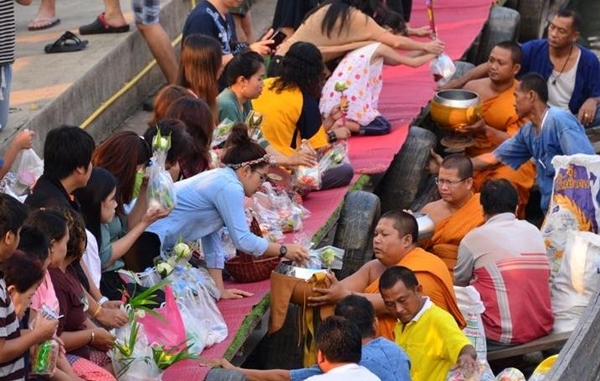 How to get there:
Kwan-Riam Floating Market can only be reached by land. If you turn down Soi 60 on Seri Thai Road, you’ll arrive at Wat Bamphen Nua. Alternatively, take Soi 187 on Ramkhamhaeng Road which leads to the second temple, Wat Bampheng Tai. Both roads have small signs indicating the direction to Kwan-Riam.
Open Saturdays, Sundays and public holidays from 7am – 9pm.
For more information, visit www.kwan-riamfloatingmarket.com or call 087-701-2878 or 081-635-1491 or 089-124-7879

I have to say that Kwan-Riam floating market is one of my favorite floating markets. It is not too crowded like other popular ones, and it is very clean thanks to the market managing team for providing the bins in every corner. I am sure you will like this place as well:)

The name of the market “Kwan-Riam” (ขวัญกับเรียม) comes from the name of the characters in Thai romance-drama novel, “Plea Gao” (แผลเก่า) meaing ‘the scar’ written by Mai Muengderm.

Kwan and Riam are the son and daughter of rival village chiefs. The couple spent romantic time in the San Saeb canal.

The novel was first published in year 1936, then it was made into a movie for the first time in 1940 and the movie was remade again in 1977. The second remade version was one of the biggest box-office hits in Thailand at the time.

It gained international recognition at the 1981 Nantes Three Continents Festival, where it won the Golden Montgolfiere, sharing it with Eles Não Usam Black-Tie by Brazilian director Leon Hirszman. It was also voted as one of the world’s 360 classic movies by the Museum of the Moving Image in London, Sight & Sound magazine and film directors and critics worldwide in 1998.

The story was remade many times in Thailand as “Kwan-Riam”.

Wikipidia has a plot of the movie here: http://en.wikipedia.org/wiki/Plae_Kao