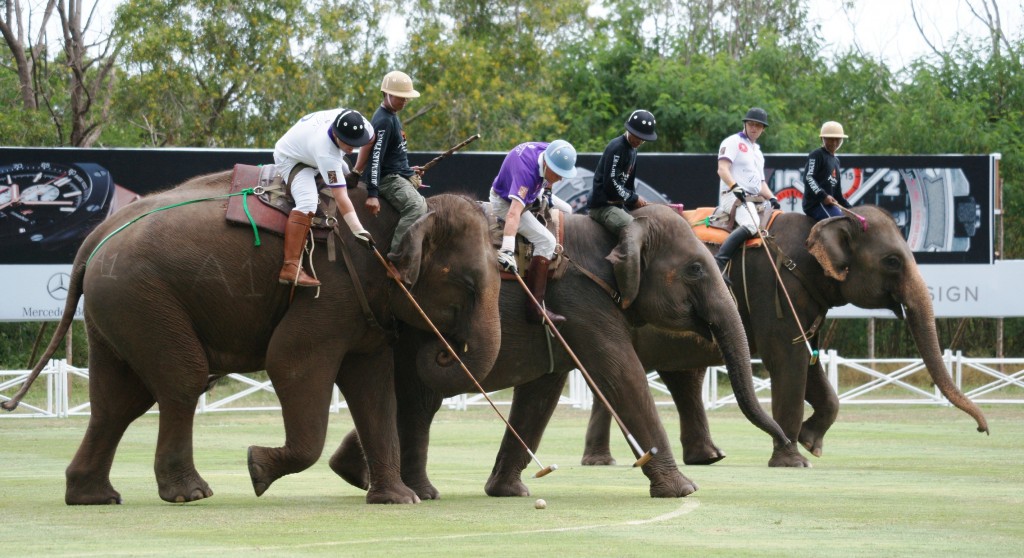 Elephant Polo: The Biggest, Weirdest, Slowest, and Most Expensive Game in Thailand

Yes, before you ask, elephant polo is played on the back of an elephant. The price tags associated with elephant polo are massive as the elephants themselves. The only thing small about elephant polo is the circuit on which it is played. It includes only three countries, Thailand, Sri Lanka, and Nepal.

the King’s Cup Elephant Polo Tournament is held once a year in Huahin, sponsored by the Anantara Hotel and Chivas. Thanks to the sponsors, all of the players, and some lucky members of the press were housed in deluxe accommodations, and kept well plied with Whisky. The teams were heavily represented by Britain and Commonwealth Countries, with the exceptions of the all Thai ladyboy team, the Screwless Tuskers, and the Mercedes, who were all German.

Each team is composed of four members. No more than three members may play at a time, leaving one player in reserve. The game is divided into two chuckas, or halves, each lasting seven minutes, with a fifteen minute break in between. The playing field is similar to a football pitch, with one goal post at either end. Just as in regular polo, the objective is to drive a small ball into the goal of the opponent, scoring one point. To drive the ball, the players use a mallet, which given the size of the elephants, is considerably larger than the one used in horse polo, generally 2.5 meters long.

The elephants are driven by Mahouts, one of Thailand’s ethnic minorities, whose job, for century immemorial, has been to handle elephants. The Mahouts were small men, who perched, barefooted, on the neck of the elephant, steering the mighty beast with a combination of secret words and physical gestures. The Mahouts used a metal hook to get the attention of the willful, if lazy, creatures, who apparently were less enthusiastic about elephant polo than the players were. The mahouts also kicked the backs of the elephant’s ears to signal left and right hand turns. Since, I was told, an elephant’s skin is several centimeters thick, one would have to believe that they hear, rather than feel the blows.

A problem, unique to elephant polo, is that the ball will often become lost, under the elephants. At those most exciting moments, when all four players press in, close together, all swinging their extra long mallets, risking life and limb for the team, the ball suddenly disappears under one of the mammoth pachyderms. And as an ironic twist of fate, the spectators can all clearly see which elephant the ball is under, whereas the players cannot. As a player you begin hearing cries from all points of the stadium. “It’s on the left!” followed by, “No, my left, not your left.”

The story behind the Game

The World Elephant Polo Association established the governing rules for Elephant Polo in 1982; the association has its headquarters at the Tiger Tops Jungle Lodge in the Royal Chitwan Park in Nepal, which is where the World Elephant Polo Tournament played every year on a grassy airfield in Megauly. This tournament is played within a relatively small circuit, including the countries Nepal, Sri Lanka and Thailand.

In Thailand, the King’s Cup Elephant Polo Tournament was first launched in Hua Hin by Anantara Resort in 2001. In 2006, the tournament moved to Golden Triangle and was hosted by Anantara Resort Golden Triangle. Elephants are a key symbol of Thailand’s history, and nothing but utmost respect is given to the pachyderms and all proceeds of the tournament are used to ensuring their welfare, sustenance, employment, mahout training and medical treatment provision.

The highly popular King’s Cup Elephant Polo Tournament will be celebrating its tenth anniversary this year and will be moving to the royal seaside town of Hua Hin in Thailand. The event which will bring the best of the last decade of the popular sporting event will take place from September 5 to September 11 and promises to have nail-biting action both on and off field.

Now in its tenth year the King’s Cup Elephant Polo Tournament has gone from a small two-day event with six teams into a week-long extravaganza, which in 2010 featured 12 teams from four continents, encompassing 40 players from at least 15 countries.