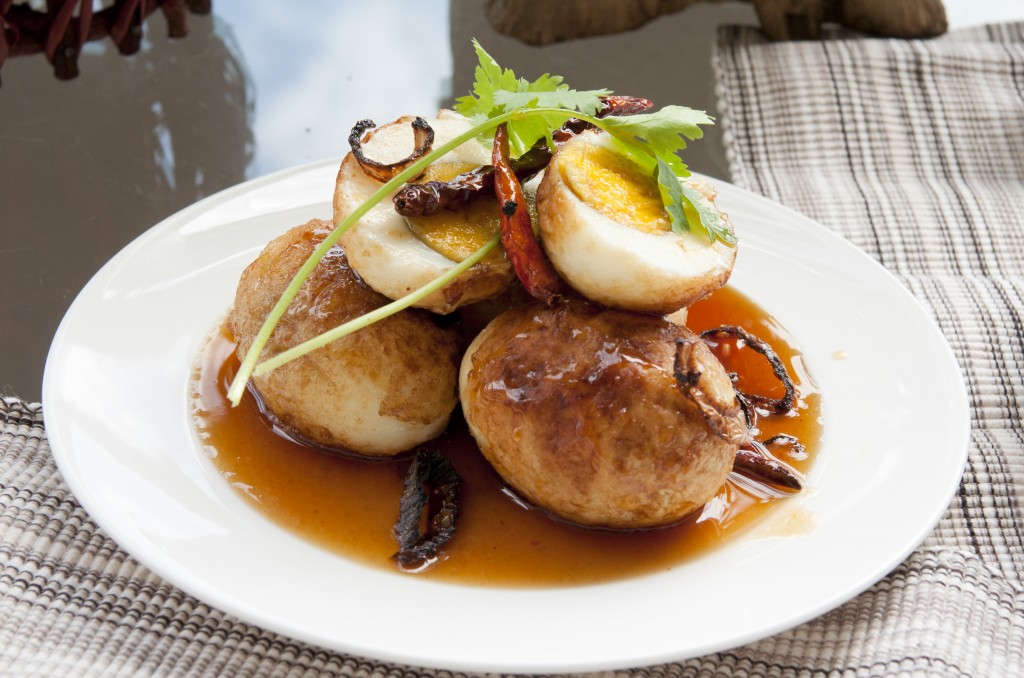 This morning I was in a mood for cooking. I decided to cook my favourite egg dish which is called in Thai “Kai Luuk Koei” (ไข่ลูกเขย)

Kai Luuk Koei made from deep-fried hard boiled eggs, which have been cut into halves or quarters, and topped with a sour & sweet tamarind sauce (ซอสมะขาม) and fried shallots (หัวหอมแดง).

I’ve found many stories as to the origin of this dish’s name:


http://www.astray.com/
“This dish is traditionally made from quail’s eggs, and the name is literalistic euphemism. The story goes that if a young man is being less than kind to his wife, then on a regular visit to his mother-in-law, she will give him a salutary reminder that his behavior has been noted by serving this dish. The message is plain, straighten up and fly right, or his wedding tackle will take the place of the similarly sized eggs in a dish of khai luk koei.”

http://www.simply-thai.com/
“Mother-in-law arrives unexpectedly after a long journey. Daughter is out!…leaving a nervous son-in-law on his own trying to impress with his hospitality. While mother-in-law freshens up he hurries into the kitchen to rustle up that special something, the problem is he can’t cook. he see’ boiled eggs left over from the meal before, they are cold so he decides to heat them up by frying them. Meanwhile he puts all the ingredients he can find into a saucepan, sugar, fish sauce, fried onions and Tamarind, and leaves them on the stove; he nearly forgot the rice. Busy sorting out the rice he doesn’t watch the saucepan and the tamarind mixture thickens and caramelises. Hoping for the best, he pours the blackened mixture over the fried boiled eggs and creates a surprisingly tasty dish, using the most common ingredients in an unexpected way. I guess she was impressed!!”

Wherever the name came from, this is a killer dish – rich in texture, great in taste. It is my fav:)